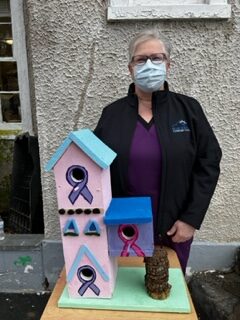 Sunni Purviance was nominated for her work with I Heart Southeast, a neighborhood action group. When Sunni moved to Roanoke, she saw the neighborhood was often under-appreciated in the community, despite the good things that were happening there. She worked on a variety of campaigns to instill a sense of pride for those who live in Southeast, including a t-shirt giveaway, a Facebook page focused on sharing positive stories from the neighborhood, and a variety of I Heart Southeast events, including a neighborhood festival, Trunk or Treat, plawking (or Picking Up Litter While Walking), and most recently, a holiday lights event. Sunni said she loves Southeast because it roots her and in turn, she roots for it. She dreams of having a small park, of installing ‘Instagrammable’ murals and sharing all that is good in Southeast with everyone across Roanoke. During our interview with her, Sunni said, “I’m just a neighbor,” but we know that she is so much more.

Susan Mayhew was nominated for her work as the Nursing Services Supervisor at Blue Ridge Cancer Care. Inspired by her mother, who was also a nurse, Susan applied for a grant to go back to school to pursue a career that would change the lives of her patients and tie in with her strong faith. Every day, healthcare workers provide treatment to their patients; that care means the world to not only the patients but to their families as well. Susan noted that she does this work because she feels called to it, that it is what she is meant to do. Just as she was inspired by someone important in her life, Susan inspires countless families every day.

Jonathan Pait, this year’s winner, was nominated for his work with the Gainsboro YMCA. Growing up in Northwest Roanoke, Jonathan always knew that he wanted to serve his community. He served in the Navy, worked as a church administrator, taught Spanish, and is currently the Executive Director of the Gainsboro YMCA. Jonathan was able to quickly pivot at the start of the Covid-19 pandemic, offering emergency daycare for essential workers, called Camp Hope, and worked with Macado’s to serve over 7000 meals to families in need during this time. We are grateful for his example in serving his lifelong community.